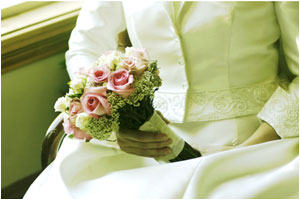 Most good men understand the importance of the moment they get down on one knee and propose to the woman they love. It’s a moment that most women dream about their entire lives, so everything has to be perfect. Some men will spend a great deal of time designing custom engagement rings, picking out the perfect location and ensuring that they know exactly what they are going to say. Others will simply pull out the ring and pop the question during a casual evening together. Both methods have their merit, and at the end of the day, it’s up to the individual to determine the best way to propose to his hopefully soon-to-be wife.

Over the years, you’ve probably heard plenty of stories about wild and extravagant proposals, from the guy who arranged a massive lip-synched musical performance to Bruno Mars’s “Marry You,” to the couple who got engaged while 20,000 feet in the air on a skydiving excursion. However, when it comes to insane wedding proposals, 27-year-old Ryan Leak has officially raised the bar. Not only did Ryan plan a surprise proposal for girlfriend Amanda Roman, complete with custom engagement rings, he also planned a wedding for the same day.

In the past, Ryan overheard Amanda telling friends that it was her dream to get engaged and wed on the same day. On top of that, he spent over a year looking at her Pinterest account, where she had created a “Dream Wedding” board with hundreds of ideas that she was hoping to use in her future wedding plans. It took a lot of careful secrecy, but with the help of family and friends, he was able to implement all of these ideas into the wedding.

After everything was planned, Ryan flew Amanda to Miami, claiming that the purpose of the trip was to help a friend move. When they arrived, he got down on one knee and proposed to her outside of their hotel. She was surprised enough by the proposal, but when they went up to their room, she found all of her friends and family waiting. The pair was married later that evening, with over 100 guests as witnesses.

Planning Your Own Perfect Proposal

Everything turned out great for Ryan and Amanda, but what he did wouldn’t necessarily work for every proposal. Some women wouldn’t like missing out on the opportunity to plan their own dream wedding, and others may be seeking a proposal that takes place in a more intimate setting. However, one thing is for certain: almost all women would enjoy having custom engagement rings that were designed just for them. There are many elements to a great proposal, but without theperfect ring, the whole thing would be incomplete.

If you’re ready to pop the question to the woman in your life, start exploring custom engagement rings at Juno Jewelry today. We offer a wide variety of custom jewelry, allowing you to present her with a piece that is truly one of a kind. Stop by today, and begin customizing a ring that you will love seeing on her finger for the rest of your life.