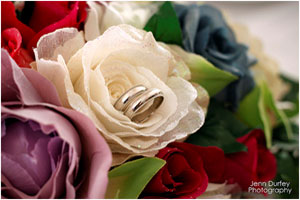 Mike Cassesso and MaiLien Le had planned to get married at the Jefferson Memorial, the scene of their first date, but thanks to the government shut down, that wasimpossible.Comedian Steven Colbertstepped in to save the day, and the couple was married live on his show on October 3, 2013.What better way to exchange yourwhite gold wedding bands then on national television?

Cassesso and Le chose the Jefferson Memorial as the site for their wedding because that was where they went for their first date. But the government shut down left the couple scrambling for an alternate location. They considered moving the ceremony to the restaurant they reserved for their reception or possibly the front lawn of their apartment building, but the bride vetoed the second suggestion because, although the yard did boast some lovely landscaping, there was also a large dumpster.

Colbert to the Rescue

The couple was interviewed on national news programs about the last minute monkey wrench, and Colbert offered to marry them on his show. When the government shut down started, Colbert stated that, "as leader of the Colbert Nation and Ur Lord of the Afterstate, I will provide all canceled government services." He repeated that promise on October 3, then showed a certificate of online ordination, and announced that he would marry Cassesso and Le.

The 2013 Government Shut Down Wedding of the Century began with a bachelor party accompanied by shots for Colbert, Cassesso and his groomsmen. The best man was not there, so furloughed government employee, Smokey the Bear, took his place.  Next, Colbert brought out the bridesmaids, did some more shots for a bachelorette party, and even got the ring bearer into the act with what looked like—and let's hope was—water shots. The groom took a ring box off of the pillow and put the box into his pocket before handing the pillow back to the ring bearer.

When the time came for the bride to walk down the aisle, Le was nowhere to be seen, so Colbert ran back to her dressing room, where she confessed to being very nervous about getting married on television. Colbert pleaded with her not to ruin his moment, there were more shots, and then Le came down the aisle in a white dress carrying Colbert's Emmy statue in place of a bouquet. Although Colbert pronounced the couple husband and wife, they did not exchange white gold wedding bands on camera.

Thecouple was blessed with a traditional Jewish blessing sung by Mandy Patinkin, who also gave a shout out to the new season of "Homeland."  Cassesso and Le danced their first dance as man and wife to a ballad-style rendition of Billy Idol's "White Wedding" by opera singer Audra McDonald.  Thankfully, Colbert did not follow the couple on their honeymoon.

If there is a wedding in your future, consider shopping Juno Jewelry’s extensive collections of custom-made rings and white gold wedding bands. Choose from many styles, cuts, and colors at www.JunoJewelry.com today.