The true genesis of the wedding ring tradition is lost in the depths of time, but there is plenty of speculation surrounding this age-old custom. While no one knows when it started, we do know that wedding rings first became common in Egypt, and the practice of wearing a ring on the fourth finger of the left hand to signify marriage quickly spread throughout the Roman Empire. 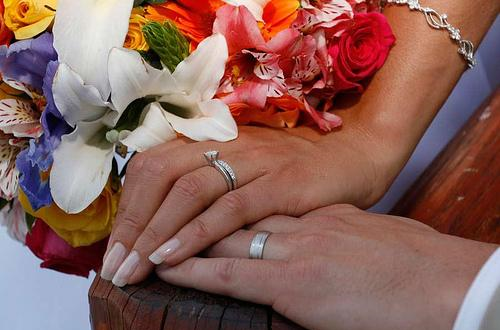 Some authors speculate that the practice of wearing a wedding ring evolved from a prehistoric time when men captured women to make them their mates and kept them tied up until men were sure the women wouldn’t run away. While this may or may not be true, we do know that the first recorded descriptions of wedding rings are from Egypt. As much as 5,000 years ago, women were wearing rings made of braided reeds on their wedding ring hand, the fourth finger of the left hand. The circular ring was said to symbolize never-ending love.

The Romans discovered wedding rings  when they invaded Egypt, and brought the tradition back to Rome. Roman brides wore rings made of iron on the wedding ring hand because there is a vein called the Vena Amoris, or Vein of Love, that was thought to run from the fourth finger of the left hand directly to the heart. Only women wore wedding rings.

The first recorded instance of an engagement ring was given to Princess Mary of Burgundy by King Maximilian I of Germany. Since that time, rings of betrothal have commonly been given to women, who wear it on the wedding ring hand. The engagement ring usually contains a diamond or other gemstone, and it is joined by a wedding band at the marriage ceremony.

The northern countries of Europe and Asia, including Germany, Austria, Poland, the Scandinavian countries, Russia, Bulgaria, and Ukraine, have a different wedding ring hand. In these countries, brides wear their wedding rings on the fourth finger of the right hand, and Jewish tradition dictates that the wedding ring be placed on the bride’s index finger.

Men did not begin to wear jewelry on the wedding ring hand until the middle of the 20th century. The tradition began with an advertising campaign by jewelers to encourage sales which fell dramatically after the Wall Street crash of 1929, but it really picked up steam during World War II. Many men chose to wear a wedding ring to feel closer to the brides they left behind when they went overseas to fight. Some men today still choose not to wear a ring because of their job or active lifestyle, but new, harder metals such as titanium and platinum can stand up to tough use. No matter which finger on which you choose to wear your rings, visit JunoJewelry.com to see our selection of wedding bands for men and women.